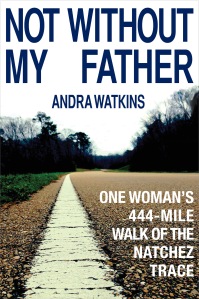 can an epic adventure succeed without a hero? andra watkins needed a wingman to help her become the first living person to walk the historic 444-mile natchez trace as the pioneers did. she planned to walk fifteen miles a day. for thirty-four days.

after striking out with everyone in her life, she was left with her disinterested eighty-year-old father. and his gas. the sleep apnea machine and self-scratching. sharing a bathroom with a man whose gut obliterated his aim.

as watkins trudged america’s forgotten highway, she lost herself in despair and pain. nothing happened according to plan, and her tenuous connection to her father started to unravel. through arguments and laughter, tears and fried chicken, they fought to rebuild their relationship before it was too late. in not without my father: one woman’s 444-mile walk of the natchez trace, watkins invites readers to join her dysfunctional family adventure in a humorous and heartbreaking memoir that asks if one can really turn i wish i had into i’m glad i did.